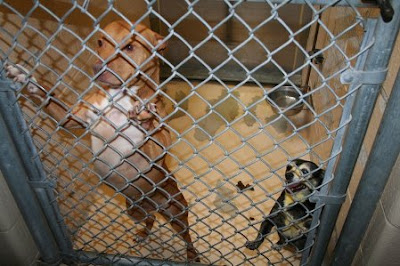 With all the stories coming out about Pitbull bans and other stereotype related stories, I thought it would be nice to read a story where the Pitbull is portrayed in a whole other light.  I hope you all have a fun read and enjoy the sweet story of Wally and Boo.


Wally and Boo — a Chihuahua and a pit bull — were dropped off at an animal shelter in southern California (not the no-kill kind) by their owner, who was moving and could no longer care for them.

It didn’t take long for the Rancho Cucamonga shelter, in San Bernadino County, to see the strong connection between the two.

During their stay at the shelter, Boo, the 4-year-old pit bull, and Wally, the 6-year-old Chihuahua, protected and comforted each other in the same kennel.

When separated, both would become depressed.

The shelter did its best — including making the video above — to try and adopt them out as a pair, but found no takers.


At one adoption fair, the pair was spotted by members of the The Fuzzy Pet Foundation, a Los Angeles area rescue group.

“We were so touched by their bond, but we also knew it would not be easy to place into a forever home a pit bull and a Chihuahua together,” said Sheila Choi, Fuzzy Pet’s CEO and founder.

“We asked the animal shelter to give us a little time to network, and begged them not to put to sleep Boo and Wally,” Choi said.

Joe Pulcinella, Rancho Cucamonga director of animal care and services, said Wally and Boo were never scheduled to be euthanized — and that the shelter spent five months trying to adopt them out together “because they were so bonded.”

Rancho Cucamonga has increased its adoption rate to about 90 percent, but still, as Choi saw it, the pair getting put down was a possibility.

“For many days and weeks, we made more than a thousand phone calls, sent out a slew of e-mails to our network of friends, family members, donors, and general supporters, hoping to find Boo and Wally a loving, permanent home. It was not an easy feat. No one had come forward to adopt this pair of lovers,” Choi told ohmidog!

That’s when Choi remembered a conversation she had with a classmate at Harvard’s Kennedy School, where she’s enrolled in a two-year master’s program.

“This classmate, Jack Jaskaran, also a New York City police captain, and I always talked about our love for pit bulls. Jack had owned pit bulls all his life, and had talked to me about adopting another one or two dogs after he graduated from the program last year.”

Fuzzy Pet shared Boo and Wally’s story with Jaskaran’s family, as well as a video the Rancho Cucamonga shelter had made and posted on YouTube. They agreed to adopt the pair.

“We bailed out both Boo and Wally on August 3, 2011. We have sheltered them at a cage-free boarding facility ever since, and today, they will be flying in cabin (NOT cargo) via a pet aircraft for NYC,” Choi said yesterday.

The Jaskarans were eagerly awaiting their arrival. “My little girl looks at the dogs’ video clip daily … She keeps telling me about Wally’s smile. We are very excited about them,” said Jaskaran.

The pair arrived, together, in New York today.

“The Fuzzy Pet Foundation believes in giving every pet a second chance,” said Choi. “Pit Bulls, especially, have a bad reputation and we want to share with everyone that they are a loyal and loving dog breed. Boo and Wally were considered by the animal shelter difficult to re-home as a pair, but we truly performed a miracle.”