Dog and Grandson Save Grandpa 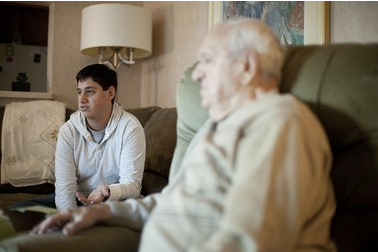 I love stories with happy endings and even better when a dog is one of the hero's in the story.  I got this story from Dogster, it is a great story about a fabulous team.  I think all of us that own dogs understand the bond you can have with them and I think we all would love to think if we were in trouble our dog would know and would be able or could be able to get help.  Well in this story, Teddy, a 5-year-old Carin Terrier, plays a very integral role in saving his owners life.  Here is the story:

If it weren’t for the combined actions of Teddy the Cairn terrier and high school student Jerry Bellissima, the teen’s grandpa probably wouldn’t be around anymore.

Tony Del Rosso was watching football at his New Jersey home when he choked on some cashews while tilted back in his recliner chair. His grandson was nearby, but wouldn’t have realized anything was amiss if not for Teddy. It seems Del Rosso choked so quickly that he passed out before he had time (or ability) to cough, much less cry out for help.

But the 5-year-old dog knew something was wrong, and started barking up a storm.

Bellissima went over to see what the dog was barking about and saw his grandfather unconscious. He immediately launched into a front-facing form of the Heimlich maneuver, which he learned in elementary school. The cashew(s) were no match for the Heimlich, and after they popped out, Del Rosso began breathing again and regained consciousness.

Del Rosso was all praise for his grandson — with whom he is very close — and his dog.

“I don’t know how he knew to come out, but he’s a good dog,” Del Rosso told the Gloucester County Times. He has had Teddy for four years, and the two are inseparable.

“I had a lot of animals growing up — horses, goats, pigs. If you could have it, I had it, and this dog is probably the smartest animal I’ve ever had,” Del Rosso said. “He understands English, I swear.”

He also seems to understand the equal importance of the sound of silence.

I hope you all enjoyed this happy little story as much as I did.  All the more reason to give your dog some special love today, you never know when they may help save your life.


Don't miss out on the Love Your Dog Pooch Parade, sign up today.  Bark on the link:  BARK!
Posted by Bark & Clark