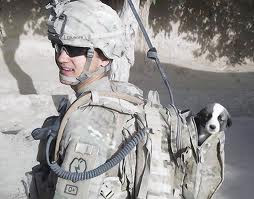 I am a sucker for the reunion stories, I always enjoy them and end up with a few tears in my eyes.  This story was no exception.  The tears were happy ones as you get to see the pup land on U.S. soil and ready to meet his solider.

The story is about "Donny Eslinger, 20, who encountered the dog while on tour of duty in Afghanistan. He traded three cigarettes to become the dog's owner. He named the dog Smoke Pup Barbarian because of the transaction."

Then tragedy struck when "a mortar attack critically wounded Eslinger in September 2011. He was in treated at the Kandahar Airfield Hospital for a broken leg, broken ribs and multiple internal injuries. When Eslinger was later flown to Germany and then the Walter Reed National Military Medical Center for more treatment, Smoke was left behind."

Now, thanks to The Puppy Rescue Mission the two will be reunited.  Below is part of the letter from Eslinger's squad leader that got the process in motion and the video of Eslinger's family greeting Smoke at the airport.  Enjoy!

"Smoke was the only bit of morale that made these kids forget where they were and cope with the tragedy we just experienced. It is amazing how therapeutic a little creature can be. Donny took care of that dog up until he was injured. Many of us in his Platoon would love nothing more than to see Smoke reunited with Donny. It would be the only decent thing we would see come from this place."

Visit msnbc.com for breaking news, world news, and news about the economy
Though the video doesn't show you the reunion, I know we all can imagine how happy it was.  They say a picture can say a 1,000 words, but this one says a whole lot more, just look at the smiles on both of their faces.  Happy reunion Donny and Smoke! 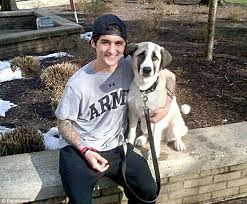 Happy Friday and have a great weekend, don't forget to do something special with your dog!

For the whole story, bark on the link:  BARK!
Posted by Bark & Clark