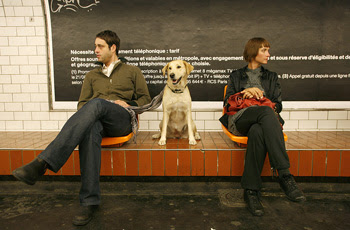 I can't tell you how many times I have been in a training session and a couple has gotten into it over their dog.  Talk about awkward!  I never know if I should get involved or sit their until they are done.  I usually say something related to the training to get us back on track.  But I see this a lot.  So when I read Dogsters blog on a British pet insurance company doing a survey that shows just how many household arguments Fido is causing, I was not all that surprised.

I feel lucky that my boyfriend is so easy going, Neville is the last thing we would fight about.  I think if anything, we fight over the cat waking us up night after night far more often than we would ever fight over what the dog is doing.

I found the statistics in the survey interesting, especially how many people considered getting rid of their pooch due to the argument.  I also had to chuckle over some of the disputes listed on the top 20 list.  For your viewing pleasure here are the findings and list.

An interesting new survey reveals that our furry best friends are the cause of three family arguments every week — about 2,000 arguments in an average dog’s lifetime.

The survey by esure pet insurance of some 2,000 dog owners shows that dogs are at the root of some 156 doggy disputes per year per household. The argy-bargy topics include who should walk the dog, feed the dog, or clean up the poo in the yard. Discipline and training also cause strife.

The British insurance agency found that about one-fourth of the dog owners say they regularly argue about where the dog is and is not allowed in the house. Most contentious in that category are where a dog can sleep, especially when one party wants a dog on a bed or sofa and the other does not. And a portion of households have problems because someone “insists on treating the dog like a human.”

Sometimes the disagreements get so bad that in 17 percent of households, one family member ends up sleeping in a spare room. In a quarter of the households, someone has stormed out of a room because of the row.

Here is quite a disturbing finding (and I can tell they did not poll any Dogsters): According to the survey results, 26 percent of dog owners “have at some point considered getting rid of their beloved pooch after a particularly bad barney.”

Here, for the record, are the top 20 dog disputes, as found by the survey:


If there is one piece of advice I can give you about arguing over your dog, it is this...remember that they only want to love you, not cause you distress.  So if your partner is not doing their part, don't take it out on the dog.

Want to show your dog how much you love them?  Sign up for the Love Your Dog Pooch Parade today!  Space is limited.  To sign up, just bark on the link:  BARK!