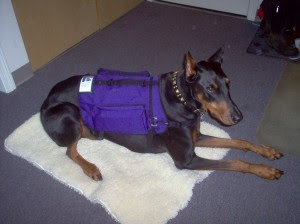 I don't think you will find a more debated issue than off leash dogs.  No matter where you live, no matter what kind of dog you have, there will always be people that are going to argue in favor and against off leash dogs.

I have told you all my one rule about having an off leash dog, so long as your dog has a recall that they will return to you no matter what, then you can have your dog off leash.  What I usually don't say, but I would hope everyone would understand is implied is that your dog is also properly socialized.

I am bringing this up today because a friend of mine sent me the article and comments below.  This same friend and I have this discussion all the time because we have been put in so many bad situations because off leash dogs.  Though my dog is extremely well socialized with other dogs, I train and handle many dogs that are not and my friend's dog has issues with other dogs due to off leash dogs attacking her.  So we constantly are trading stories about how we had to get out of a situation that could have gotten ourselves or our dogs hurt by an off leash dog.  These stories and the ones below always have one thing in common.  The owner or handler of the off leash dog doesn't think it is necessary to leash their dog even when you ask them to.

What I would like all of you to question when you are reading this is when did we as a dog society decide that we no longer had to be considerate of other dog owners?  When I yell over to the owner of an off leash dog and ask them to call their dog back, instead of a "sure, no problem", I get "Why? What's wrong with my dog?" or "No, my dog is friendly!"  What has been lost is thinking about the other dog owner.  What is so hard about just calling your dog back and avoiding the interaction, does it really never cross their mind that my dog might not like other dogs?  I just wish all dog owners could support one another and allow us to do what is right for our dogs.

Please read this article and the thread of comments below.

Service Dogs need space to work. But they’re not getting it from us. Turns out, off leash dogs and dogs on retractable leashes, not to mention humans with no boundaries, are an epidemic for people who depend on Service Dogs.

And then there are life altering encounters.  Attacked by a “friendly” off leash dog, Kristel and her Service Dog, Murphy, had their world turned upside down in a single moment.

This is their story:

“Murphy has been prepared for service work since he was a young puppy.

He was well-socialized and exposed to all manner of weirdness from the time he was about nine weeks old. He went to puppy-kindergarten, met lots and lots of new people and had a group of dog-friends with great social skills. He was easy to train, well-mannered and confident. He got through his basic training, public-access training and task-specific training without a hitch.

When he was about three and his training was complete, our family decided to move into town (we had previously lived in a rural area). The adjustment was challenging for all of us, but after about two weeks or so, we settled into a routine and Murphy continued to perform his job flawlessly.

One morning we were walking on the local bike path just for recreation and exercise, and we had a 30 second encounter that made our lives hell for the next two years.
It had always been my habit to stay in areas that prohibited loose dogs and to choose Murphy’s playmates carefully because of the importance of his work and the need to keep him physically and psychologically healthy and sound.

There was a clearly posted leash ordinance on the path. Even so, out of nowhere a loose dog came running toward us, his owner, about twenty feet behind shouting “He’s friendly!” in the usual manner of those who believe they are exempt from the leash laws.
The dog wasn’t friendly at all. He went straight for Murphy’s neck without making a sound. I had to kick him repeatedly to get him to let go, and even then he kept trying to latch on. The owner yelled at me to stop kicking his dog. I promised that I would the moment he had regained control of him. I was so angry to be put in a position to hurt an animal, but I would do it again to protect my dog. The owner finally arrived and grabbed his dog by the collar. He wasn’t even carrying a leash.

The owner wanted my name in case his dog had broken ribs. I agreed that an exchange of information was a great idea, so I would have all the information I needed when I called the police to report the incident. The guy just shook his head and said “I don’t get it, he’s so good with the kids”, and he walked away without either of us getting any info at all.

Thirty seconds of a pet owner’s bad judgement, that’s all it took. After the encounter Murphy became profoundly leash-reactive to other dogs.

This is a dog I depend on to live my life and get through my day, and now he would come completely unglued at the sight of another dog.

To say I had no life at all during Murphy’s TWO YEAR rehab is an understatement. I couldn’t work, it cost me hundreds of dollars in training and equipment, and I had to watch my previously confident and happy-go-lucky dog struggle just to be in proximity to his own kind. Years of work, years of careful exposure, years of my life shot to hell in thirty seconds.

We are ‘out-the-other-side’ now for the most part. Murphy is back to work and can handle most situations with other dogs again. He’s never going to be okay with a strange dog in his face, but I can live with that.

I appreciate your efforts to educate the public, so much. If people would just obey leash laws it would be HUGE. Any dog could be a service dog, just out for a walk; you never know. And it shouldn’t matter. Each of us should have the right to decide how we socialize our dogs and not have that decision made for us.  Thank you for calling so much attention to an issue that is not only relevant to many, but life-altering for some of us.” – Kristel S.

Leash laws exist for this reason. If you allow your dog to run loose, in a designated on-leash area, you’re making a choice that could profoundly impact the lives of those around you.

Leash laws are not optional.

If you think it’s oppressive, being required to use a leash: it’s not.  If you think you’re the exception to the leash law, because your dog is friendly: you’re not. This is bigger than you and your dog.

People who depend on their Service Dogs for their lives should not be harassed, chased, intruded upon, or attacked because people are too ignorant or irresponsible to control themselves or their dogs.

All of us, whether we have service dogs or not, deserve to live in a safe, respectful environment.  We can create that type of community by not making poor choices and assumptions that could cost a dog or person their entire quality of life.

It’s time to leash up and give dogs some space. No more excuses.

Here are the comment thread that go with this article, I find these to be almost as interesting as the article itself.


Cindy Eyler I have two dogs who became dog reactive after we were jumped by two off-leash dogs while on a walk. That was the last time I ever walked two dogs at the same time -- If I'd had only one dog with me, I could have done a better job of protecting my animal. Makes me furious when I think of what was stolen from us that day.
7 hours ago ·