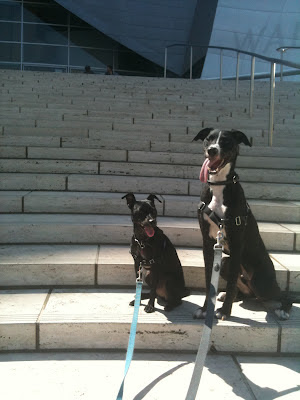 Though the debate over dogs living Downtown is still ongoing, about 40% of our residents opt to own a dog.  That's right, 40%!  This article posted on The Atlantic Cities.com and sent to me by a client, outlines the progressive dog movement Downtown and how dogs may have saved this city.  It is a great read and a little bit of feel good news for this Friday.

We know Lassie can save Timmy from the well, but can she also save a neighborhood? In downtown Los Angeles, the answer seems to be yes.

Take a walk through the Historic Core district almost any time of the day and formerly deserted sidewalks are now awash with dogs and their owners. While this may seem like a natural outcome for a hotspot with an influx of residents, it’s actually by design, the result of a planned initiative by landlords to attract new renters.

In 1999, Los Angeles passed its Adaptive Reuse Ordinance, making it easier and cheaper for real estate developers to convert old offices to new housing. While the ordinance arguably jump-started the revitalization of downtown L.A., a key (though overlooked) element was pet-friendly policies in these newly converted lofts.

Walking dogs drove residents out of their homes and into the street at least twice each day. Elsewhere in Los Angeles, where single-family homes predominate, dog owners often have the luxury of sending Fido out to the yard to do his business. But downtown, dogs and their owners have become a crucial component of the rebounding neighborhood's culture.

Real estate developer Tom Gilmore was an early champion of Los Angeles’ downtown revitalization, converting historic buildings such as the San Fernando and Hellman Buildings in the Old Bank District to lofts more than a decade ago. Part of Gilmore’s plan for the neighborhood included an aggressive campaign to attract dog owners, welcoming dogs of all sizes and forgoing a pet deposit.

It was a decision made easier by the concrete floors and thick walls in these buildings, making pet damage less likely to occur. It’s also one that worked: about 40 percent of downtown residents now own a dog, according to the Downtown Center Business Improvement District.

"Random interaction is a key component of a vital urban environment," says Gilmore. Dogs, he reasons, are the "lubricant" that helps residents interact with their neighbors and local shop owners. "Walking out of your door every day should bring a series of unintended events."
Tomoki Echigo, who lives in the Arts District and owns a lab/pitbull mix named Gumbo, finds the influx of four-legged friends has helped build a sense of community. “It helps us get to know our neighbors,” says Echigo, who walks Gumbo four times a day. “It brings the community closer."

Of course, the question of which came first, the dogs or the neighborhood renewal, is debatable. USC Associate Professor in Public Policy Elizabeth Currid-Halkett sees the growth of the canine community downtown as a symptom rather than a cause of revitalization. “Other types of economic development efforts, such as attracting amenities and businesses, revitalizing old lofts, and cleaning up the streets will attract downtown denizens, who will bring their dogs with them," she says. "The accidental spillover effect of these inhabitants, including the small furry ones, does help increase safety just by virtue of the fact that more people increases density and more use of the sidewalk."

Despite the chicken-and-egg conundrum, the influx of dog owners has resulted in grassroots efforts to reclaim public space. In one example, residents converted an empty lot into the Arts District’s Saslow Dog Park.

For the original article, bark on the link:  BARK!