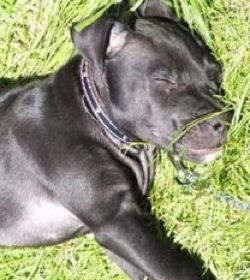 Okay, get your tissues ready!  This is just a sad and disturbing story about a dog named Lennox that was taken from his family for no other reason than looking like a Pit Bull.  Remember this is in Northern Ireland and the laws and rules are different than here.  However, I still disagree with what happened and I am very disturbed!

Dogster had the entire story on their blog this morning, so I am re-posting for you to read and watch the video. 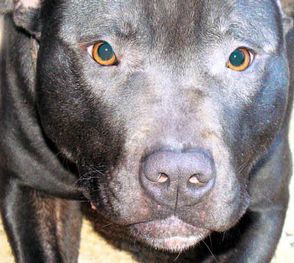 Lennox has lost his last chance to escape a death sentence -- just because he looks like a Pit Bull.

A valiant worldwide campaign to save this dog's life has apparently failed, thanks to a court decision this week in Belfast, Northern Ireland.

Because of breed-specific legislation, Pit Bulls are illegal in Northern Ireland. In May 2010, a 5-year-old American Bulldog-Labrador cross named Lennox was taken from his owners by the Belfast City Council and declared a "danger to the public" simply because he was a "Pit Bull-type dog." Lennox was then placed in a kennel, waiting to be euthanized.

His distraught owners mounted a campaign to save his life. Word spread around the world that Lennox had been microchipped, Safe Pet registered, and DNA registered, and that he was a protective companion to the family's disabled preteen daughter. Even though the DNA registry evinced no trace of Pit Bull in Lennox's ancestry, the death sentence was not removed.

Striving to save Lennox's life, owner Caroline Barnes said in court that the dog had never bitten anyone or misbehaved since being impounded, according to Irish Central.
"She says her dog was never given a chance."

On Tuesday, Barnes' legal team went before the Court of Appeal and three judges to make a final plea. But the judges remained firm, confirming yet again that Lennox will be put down.

"An expert dog handler, retained by the City Council, said Lennox had a severe personality defect, including having a problem with strangers. They added it would be impossible to tell what the dog might do under stress," Irish Central reports.

The court’s statement reads:
“The judge had heard evidence on the issues relating to this dog over a protracted two-day hearing, carefully considered the evidence and the issues, and he reached conclusions of fact which have not been vitiated by any error of law on his part.”

No date for Lennox's destruction has been released, nor will the Barnes family get a chance to see him again before his death, Irish Central reports. We at Dogster HQ think that's just plain cold considering all they have done to rally support around their dog over the past two years.

The following message was posted at the "Lennox Campaign" Facebook page:
"Lennox's family will release a statement in due course once they have had time to absorb today's ruling by Chief Justice Girvan. The family kindly ask all supporters to remain calm and dignified as always in their response to today's sad and very wrong decision by the Northern Ireland Chief Justice. Thank you."

Advocates for Lennox launched a petition on Tuesday. Titled "Boycott Belfast," the petition reads:
"This page is to let Belfast know that animal lovers all over the world are angry and that we will not support them in any way -– EVER. We will never travel to their city –- some will even not come to the country, we will not endorse you in any way. Unless something is done to make this injustice right."

Editor's Note: When we first heard this story, we were hoping against hope for a happy ending for this dog who had done NOTHING wrong. He wasn't even the "breed" they were discriminating against! This is disappointing and disgusting, Northern Ireland, and we're crossing you off our places-to-see list.

Lennox, sweet boy, you won't be forgotten by many of us around the world soon.


Again, I am left with just a sad feeling.  If you think your actions don't matter, they do, get involved to stop this type of discrimination.  It makes me sick that a dog is being put to death because of the way he looks.  I think any dog that has been kept in the kind of conditions Lennox has and has been separated from his family without a kind, loving face for 2 years may be a little off with strangers.  I don't think the test was fair and certainly do not think it was right for this family to be kept from even visiting their dog.

As Dogster already said, Lennox, you will not be forgotten!