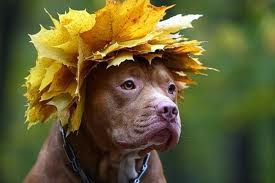 Anytime there is a good story about dogs I love to share it, especially if it is about a Pit Bull or Pit Bull mix.  This story is a good one, but also with a bit of a sad element.  Lucky is a Pit Bull mix whose owner died and left him his entire estate.  Lucky is only 3 years old and not the most comfortable around people, so I am certain that he would trade this estate worth millions just to have his owner back.  Below is the whole story by Dogster.


We don't know why Kenneth Bortz named his dog Lucky, but he sure made the name mean something. He made Lucky his heir, and upon Bortz's death, Lucky got the estate. What an estate: The Pit Bull mix is now sole owner of "hundreds of antiques and a dozen collector cars," reports KHOU-TV. "Enough treasures to fill 10 homes."

To be sure, Lucky probably doesn't think what happened to her is lucky at all. Her owner died. Lucky doubtlessly just wants her owner back. But at least she'll get to live out her days in ease and comfort, well-provided for with many resources at her disposal.

By all accounts, Bortz loved his dogs. He had 12.

"His daily ritual at the end of the day was to sit out back by his fountain, and he'd hand-feed anybody that showed up," trust manager Tim Connolly told KHOU-TV. "Kenneth took care of him well in terms of just the basic necessities."

"For Kenneth, his dogs were basically his children, his family," Bortz's friend, Skipper Dixon, told KHOU-TV.

Upon Bortz's death, four dogs remained, and three died shortly after. Now there is just Lucky, who's 3 years old, heir to a warehouse full of fine antiques undergoing a series of estate sales to be converted into cold, hard, kibble-buying cash.

There's just one problem: "Lucky doesn't really like people and rarely comes out from under her little cubby," according to MyFOXdfw.com. The job of warming up Lucky to her new life falls to David O'Shields, a former employee of Bortz's, who has been named the dog's caretaker.

Perhaps he's not the right man for the job: "He won her over with chicken from KFC and other restaurants," reports MyFOXdfw.com. O'Shields said, "We usually give her two thighs and a leg. It got to where she'd be waiting for us."

Hey, David O'Shields, cooked chicken bones splinter! But we imagine he will learn quick, with millions at his -- er, Lucky's -- disposal.

I hope David O'Shields finds a little bit better of a diet for Lucky, but I am sure they will work it out.  My fingers are crossed for Lucky that he gets to live a happy life of luxury!
Posted by Bark & Clark