What Is Happening With The Cornfield? 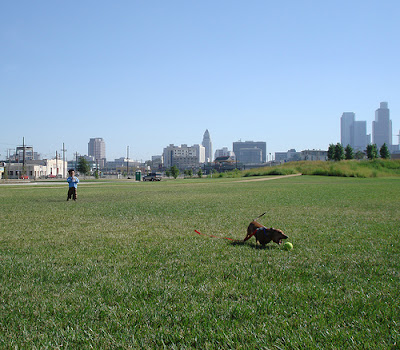 I think one of the best parks to go to in Los Angeles is the Cornfield, also referred to as Los Angeles Historic State Park on Spring Street.  It is the perfect place to take your dog for a session of fetch or few laps around the track.  It is a day of fun with your dog for sure.
The California State Parks Department announced last week their future plans to improve this park.  After securing money from Prop 84 (passed in 2006), they have planned an $18 million make over.  It will expand the current 13 acres, creating amenities such as pavilions, an architectural display, permanent restrooms and additional parking. It may also hide or move the high-speed train system that runs right past the park.  In the future plans, the train could run right through the middle of the park or the park officials may end up moving the tracks.
I really do not want to see the train tracks moved, part of the charm of the park are the trains racing past.  I think there is a compromise that the park officials and the train system can come to that will allow the park to expand and the train to exist.  My fingers are crossed that the optimism being shown from the State Parks Department that all will work out will push this along and by 2013 we will have a bigger and better park to frolic in with our dogs and each other as planned.

To show you what great fun you can have at the Cornfield, watch the video below:


For the full story, bark on the link: Bark!
Posted by Bark & Clark