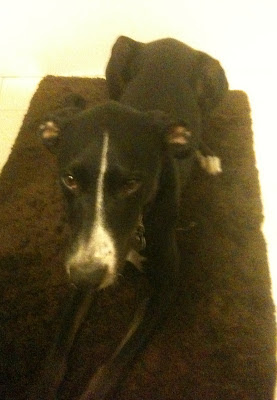 We are well on our way with Neville's Acupuncture treatments, yesterday was #6 or #7, to be honest I have lost count.  It is such a pleasure to spend that time with him, it has really become a special bonding time for us.  Yesterday was by far the best to date in terms of his behavior while getting the treatment and the effects afterward.

He always is a bit anxious about being at the vets office, so the waiting period no matter how short, proves to be stressful.  But yesterday he was much better than usual.  There was a cute puppy in the lobby that he was taken with, so I think that helped a lot.  But he was not just interested in the puppy, he also sniffed one of owners, which was a man!  I was already impressed and the session hadn't started yet.

Once we were in the room and the music was going (I play Through A Dog's Ears to relax him) he settled down and greeted Dr. O'Dwyer with a big kiss hello.  He is showing more and more affection towards her which is a great sign!  As Dr. O'Dwyer and I talked, Neville laid down on the blanket between us, that is a first!  He stayed there for almost all the placements of the needles, it wasn't until we had to do the few he is not a big fan of that he got up and moved.

Once the needles were in and Dr. O'Dwyer left the room, he basically laid down and went to sleep and did not stir.  I touched his side at one point and he raised his head, but then went right back to sleep.  He usually lays down and will dose in and out of sleep, but never has he been this relaxed and deep into sleep.

Once the needles were out (which Dr. O'Dwyer is now able to take all of them out without me helping, Neville I think understands she is not placing any more)  he was still so sleepy and remained that way until we were home.  Walking through Downtown from our parking lot to our apartment woke him up for sure, but he was not pulling and seemed to not be shaking.  A skate board even passed us, granted it was a quite one, and he did not react to it.

The late night walk was a little hard to get him going, he wanted to stay and sleep!  But once he was out walking he did great and he did great on his morning walk.  His confidence in the house is changing a lot through this process.  It is most noticeable when someone knocks at the door, it is not just a scared bark from his crate, he is now running toward the door with a deep "scary" bark!  I still make him go to the crate and am now working on not barking at all, this was never a problem as the barks were usually only a few and then he would stop.

When were are out and about his pulling is much less and he is much more tolerant of the people he encounters.  Neville is also showing less stress signs.  They are still there, but much more reduced than they use to be.

My next step is herbs.  I want to see how that and they acupuncture work together.  It is a slow process, but I do see improvements, so I am going to keep going for now.  I am just so happy that he gets some relief from the fear, even if it is just the 20 -30 minutes during treatment.
Posted by Bark & Clark