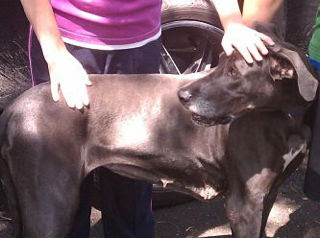 Anyone that knows me knows that one of my favorite breeds of dogs are Great Danes.  I love them for their personality, pure hugeness and (like all dogs) their undying devotion and love.  I've not met one yet that doesn't have some cork to them and to me that is all part of their charm.  When I learned of this story about a man having to give up his Dane to be put down, only to find out two years later she is alive and well, I had to share it today.  I love to end the week on a happy note and though you may shed a few tears, I promise they will be happy.  Here is the beautiful story of the reunion of the Baton Rouge, LA man, Ben Gautreaux and his Great Dane, Bluebelle.

Isn't it nice when we get to wake up from our nightmares?

A Baton Rouge, LA, man was reunited with his beloved Great Dane on Monday after believing for the last two years that she was dead.

Before that fateful day two years ago, Ben Gautreaux had kept his three Great Danes in his fenced yard, but all three had a penchant for escaping, usually led by a 2-foot-tall blue female named Bluebelle. Officials "picked them up a couple of times and said that if they picked them up again then they would be [considered] a threat to society," Gautreaux told WVUE-New Orleans.

After the dogs escaped once too often, officials delivered an ultimatum

But two weeks ago, Gautreaux got a call from a staff member at the SPCA in Buffalo, NY, who shocked him by saying that Bluebelle was alive and well and had just been identified, thanks to a microchip that Gautreaux had placed in her years before.

Instead of being put down by Baton Rouge officials, she had been adopted by a family that then moved to an apartment in New York, where they could no longer keep her. That's how Bluebelle wound up in the shelter.

Buffalo resident Chris Silverstein offered to drive the Great Dane home to Baton Rouge.
"She knew she was in the South right away," Silverstein said, as reported by WVUE. "Her entire attitude changed. She was a lot more animated and quite a bit happier."

They arrived on Monday. When Gautreaux called Bluebelle by name, the big dog leaped into his arms.

The strangest part of this story is that the Buffalo SPCA director dubbed the dog Bluebelle even before learning that this was her original name, according to Silverstein, who has made a man and a dog very happy -- and has shown us all that we should never say never.


Thank you Dogster for bringing us that story!

Please have a good weekend and keep your pups close!  Don't forget to do something special with your dog!