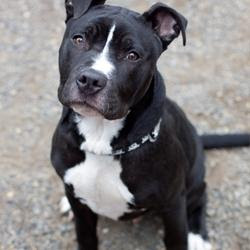 It is not very often we get the chance to spread good news about Pit Bulls.  Mainly, because the media makes sure to cover every awful and horrific story that reinforces the belief that Pit Bulls are vicious and dangerous dogs.  To be fair, we have in the last few years started to hear some good and uplifting stories about Pits in the news, but they are much less than all the bad ones and unfortunately, the societal view is formed based on all the bad news.

I find it exhausting at this point to hear another misinformed person talking about how scarey the Pit Bull on the corner is, when more often than not, the dog is actually very sweet.  Just yesterday I saw a client with one of the sweetest most endearing dogs that is a Pit Bull.  We had a conversation about his barking when people come to the door.  Like most dogs (no matter the breed) this dog barks at people when they approach the house and knock on the door.  Now, this dog listens and will settle down, but the problem for my client is that people are scared of his dog because it is now a "vicious" Pit Bull barking at them.  If this was a little Terrier or perhaps a Golden Doodle, people would think so differently.

So, when I saw this article this morning on Petside.com, I really wanted to share it for all the Pit Bulls in my life.   Ohio has changed it's law and Pit Bulls are no longer a "vicious dog" based solely on their breed.  Below is the full story:

To say the least, it's been a controversial month for pit bulls. Earlier this month, the Maryland Court of Appeals ruled that pit bulls were an "inherently dangerous" dog breed, prone to aggression that results in dog bites. As such, the state ramped up regulations surrounding pit bulls and made owning the breed more difficult by holding not only dog owners responsible for their pup's actions, but holding landlords who rented to pit bull owners liable as well. The decision made animal rights activists and pit bull advocates furious.

In a story that seemed to almost counter Maryland's ruling, a hero pit bull named Lilly saved her owner from certain death on a set of railroad tracks, showing a softer side to the breed. The question of whether pit bulls were actually naturally dangerous was muddled even further. Now, the state of Ohio, which formerly had a hard line stance on pit bulls, has softened their feelings on the breed.

According to an article on CBS News, a new Ohio law has redefined what it means to be a "vicious dog."

In the old law, a vicious dog was defined as a dog that "has seriously hurt or killed a person, killed another dog or is among those commonly known as pit bulls." The new law removes the references to pit bulls, and allows for pit bull incidents to be handled on a case by case basis.

The new move adds more fuel to the fire in the pit bull debate. The Maryland ruling had left many animal activists fearing that other states would proceed in a similar fashion in regard to their treatment of pit bulls, opening the door for widespread breed discrimination. The Ohio law seems to counteract that though. Perhaps the Ohio legislators were convinced by recent news events that pit bulls do have a softer side.

It is a small step, but certainly in the right direction.  To all my Pit Bull friends, no matter what your issues, I see you as the beautiful, amazing and loving dogs that you all are to me and I am happy for this small victory!

What do you think about Pit Bulls?
Posted by Bark & Clark