A Dog's Loyalty and Love 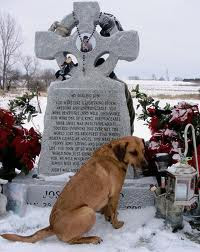 Dogster had a story in their blog yesterday about a few different dog's that have shown their undying loyalty by standing by their deceased owners until they were found.  I found each of these stories so intriguing and special.  All of you understand the bond and love you have with your dog and I am sure you have allowed yourself for a moment to think "I don't know how I will say goodbye when it is time".  But I wonder if dogs think the same thing?  The stories below would suggest that they are willing to stand by us until the very end, no matter what that might mean.

After the accident, the loyal dog stayed by his dead owner's side until investigators arrived.
They were friends until the end -- and then afterward.

A small dog stood vigil beside the dead body of its owner after the latter was killed by a hit-and-run driver while cycling on the California coast last Thursday.

The victim -- as yet identified only as a white male aged about 50 -- rode a black bicycle north on gorgeous Highway 1 near Santa Cruz that night. In a crate affixed to the bike was his dog, which Santa Cruz County Animal Shelter officials have identified as most likely a Cairn Terrier mix.

Sometime that night, "the victim and his bicycle were pushed off the right shoulder and down an embankment where he suffered fatal injuries," according to the CHP, as reported by NBC-Bay Area.

A passerby spotted the man's body, the damaged bike, and the dog in the underbrush on Friday morning and called 911, according to the Silicon Valley Mercury News. Broken headlight debris indicated that the man had been struck by a vehicle, which officials believe might have been a green sedan or SUV. Investigators arrived to find the dog standing vigil by the dead man's side after having stayed there loyally all night.

Finally separated from his friend, the dog was picked up by the Santa Cruz County Animal Shelter for evaluation.

Do dogs in these situations know that their beloved people are not simply asleep? Can they smell death? What do they think about while waiting for some kind of help to arrive?

That same month, a boater went missing on a South Carolina lake. Russell Sandlin was last seen alive "getting into his boat with his dog" at Lake Murray, according to WXII-TV.

Sandlin's boss asked the Sheriff's Office to perform a welfare check after Sandlin failed to show up for a meeting or answer his phone. Searchers found his body among some tree limbs, where he was apparently thrown after his boat ran aground in a shallow cove. There were no signs of foul play.

"Searchers said Sandlin's Weimaraner, Sadie, was trying to remove the branches and was licking her owner's face."

If that's not love, what is?

Such sad situations in each of these stories, but what an amazing gift each of these dog's gave their owners by not leaving them, not even in the event of death.

Give your dog an extra hug today and I hope they never have to act as these dogs did.