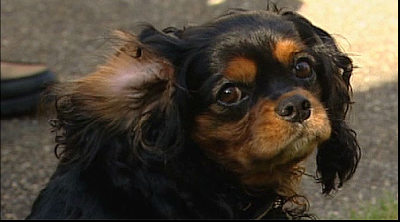 I can't imagine being a child in a home where the parents are getting a divorce and on top of that your best friend and pet dog are going to the pound.  What an awful situation for a family.  But this is something that happens all the time.  Dogster brought us a story with a little twist on this sad situation.  Instead of allowing their beloved pet to go to the pound a very dear child took matters into their own hands.


When a King Charles Cavalier spaniel wandered into Paul Wu’s driveway and wouldn’t leave, the Kirkland, Wash., resident got out of his car to inspect the little dog more closely.

He found a red, bone-shaped container attached to the dog’s collar. On the container was the hand-scrawled word, “OPEN.” So he did.

Inside he found a note and some money. The note, hand-written on lined yellow paper, read:


Please take care of Mr. B. He is a King Charles Cavalier Spaniel. Six years old. My parents got divorced and Mr. B was supposed to go to the pound. I think he has a better chance with you.  This is my birthday money for any of his care. He is used to kids, not other dogs.  He’s a good boy.  I know God will take care of Mr. B – Everyone loves him…especially me. Thank you.”

Wu was very touched by the note, and didn’t want to leave the dog on his own, so he brought him to work with him. There, coworker Robert Kuchcinski, who has three children, decided to lend a hand. He brought Mr. B home after work, and took him to the vet’s. The tagless dog had no microchip, but got a relatively clean bill of health. (He looks well fed.)

Kuchcinski’s family fell fast for Mr. B. They’ll be keeping him.

“I’d hate to be a kid making that choice,” Kuchcinski said. “It didn’t seem right that it would go to the pound.” (Yes, he’s calling him ‘it,’ but he’s a new dog owner, so that should improve with time.)

It’s been a few days now, and Mr. B is settling in beautifully. With three kids and two adults, there are sometimes 10 hands wanting to pet him at once. And he looks oh so comfy on the chaise lounge.

Wu appeared on a local news station in order to get word to the child/teen who dropped off Mr. B. ”

“All I want to do is let this person know that we found him a good home. That’s the whole message,” said Wu.

Though this story has a happy ending, it could've been so different if the wrong people would've ended up with Mr. B.  I hope that the child that had all the faith in the world in their fellow man now knows that Mr. B is okay and has a good home.

For more on the story, bark on the link:  Bark!

For more information on training with Bark & Clark, bark on the link:  Bark!