The Power Of One Little Boy 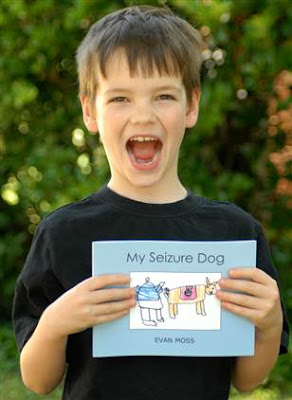 A good friend sent me this amazingly sweet and inspiring story.  I thought it was the perfect sentiment to send you all into the weekend on.  I hope you all get as much out of it as I did.

Evan Moss’ seizures come quietly in the night. When they strike, the 7-year-old’s parents have to give him medicine to make them stop — or risk brain damage. But to do that, they have to know they are happening. Lisa and Rob Moss live in fear of missing one.

The seizures are so silent that even if Rob and Lisa sleep in the next room with a baby monitor to listen, they can’t hear them, so Evan sleeps with them in their bed. “We go through life pretty much not well-rested and with a strong addiction to caffeine,” says Lisa Moss.

But a service dog, specially trained to detect seizures and alert Evan’s parents could help insure that Rob and Lisa don’t miss a seizure, and also make it possible for Evan to sleep in how own bed.  The catch? A dog like that costs about $13,000.

To raise the money for a dog for Evan, who has a genetic disorder and epilepsy, the family discussed the usual options: a 5K run, a dinner with a band, a lemonade stand.

As almost an afterthought, they came up with the idea of self-publishing a short book Evan had written as part of his application for the dog. Initially, they modestly hoped maybe they could sell 150 at $10 apiece. But Evan has now sold 10 times that many copies of the 26-page “My Seizure Dog” and counting. As it turns out, none of the profits from book sales needs to go toward the cost of the dog, because donations alone have topped $26,000 — more than twice what the Alexandria, Va., boy Evan needed for his dog. The additional thousands of dollars, plus proceeds from the book, will make up the difference between what four other children’s families have raised and the cost of their service dogs.

Not a single drop of lemonade ever had to be sold.

A July 24 book-signing drew an estimated 650 people to a local coffee shop, and at one point Evan’s book ranked 125th in sales among all the millions of books on Amazon.

Evan, a rising second-grader whose favorite part of the school day, except maybe recess, was “writer’s workshop,” isn’t fazed by the attention.

“It feels pretty nice,” he said Thursday morning before his mom, Lisa, took him to day camp.

Evan’s dog will be trained by the nonprofit 4 Paws for Ability and will be ready for the family to pick up next June. It will be either a poodle or a poodle mix, Lisa Moss says, because poodles are less likely to aggravate her dog allergy.

The theory is that seizure dogs can pick up on a scent related to a chemical change in the body that precedes a seizure, says Moss who, along with her husband, runs the free website seizuretracker.com, which helps families around the world track their children’s seizures and medications.

Evan’s dog hasn’t yet been selected by 4 Paws, so the Mosses don’t know how it will alert them to an impending seizure. Some dogs bark, others nudge parents, says Karen Shirk, the nonprofit’s founder. “Each dog has their own way of getting attention,” Shirk says.

Still, Lisa Moss says, “that’s a really big task to put on an animal. At the beginning, we’re basically going to have a boy and a dog in our bed. At some point, Evan will be back in his own bed with a dog.”

Evan’s parents first recognized that he was having a seizure when he was a month old, although Rob Moss says he could have been having them since birth.

Evan Moss, who has epilepsy, signs his book at a book signing at Grounded Coffee Shop in Alexandria, Va. He wrote the book to help raise money for a dog trained to detect seizures.

Evan was diagnosed with a rare genetic disease called tuberous sclerosis complex, which causes benign tumors to grow in the brain and other vital organs, such as the kidneys. Because of tumors in the brain, most patients also have epilepsy. By age 4, Evan was having 300 to 400 seizures a month, but after surgery to remove the brain tumors, he was seizure-free for two years before they returned.

According to the National Institutes of Health, tuberous sclerosis affects 25,000 to 40,000 people in the United States and 1 million to 2 million worldwide. With proper medical care, most can expect to have a normal life expectancy.

Most cases occur as a result of spontaneous mutation in one of the genes that cause the disease, so they’re not passed from parent to child. But children also can inherit the disease from an affected parent so “it’s possible that one of us has it,” Rob Moss says, noting that some people with mild cases aren’t diagnosed until adulthood. To be on the safe side, he added, Evan’s big sister, 9-year-old Aria, will undergo genetic testing when she’s older.

Evan won’t get his dog until next summer, but he’s already making plans to write “My Seizure Dog 2” after he gets his new companion.


It is truly amazing to me that one little boy can have such an impact and such a heart!
If you would like to read the original story, bark on the link:  Bark!