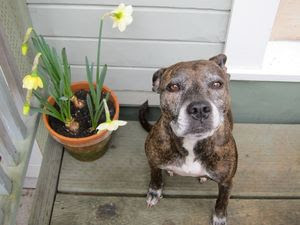 On Friday a story was released that made me so sad for many reasons.  First, a dog killed their owner and she was pregnant at that.  But the unfortunate part of this story is that the dog is a Pit Bull.  I cringe every time I see a story where a Pit Bull attacks a person or a dog because this is one breed that just doesn't need any more bad press.  I feel like I need to talk about the story, but when you read the story I ask that you read it as a dog attacked their owner, not a Pit Bull attacked their owner.

A pregnant San Francisco area woman was killed by one of her pit bulls, her mauled body found by her husband, police said on Friday.


The 32-year-old woman was pronounced dead on Thursday afternoon at the couple's home in the seaside village of Pacifica, south of San Francisco, Pacifica Police Capt. Dave Bertini said.

Authorities withheld the names of the victim and her husband.
Bertini said the woman's husband told police he came home from work at around noon on Thursday to find one of the couple's pit bulls standing, bloodied, over his wife's mauled body.

First responders to the scene found the woman unresponsive in a front room of the home with massive trauma to her upper body, Bertini said.

A second pit bull was found cowering in the corner.

Bertini said the man told authorities that the attacking dog, a two-year-old male named Gunner, was confined in a back room.

But when the dog managed to escape and enter the front yard, officers shot it three times, Bertini said.

Both pets were taken to Peninsula Humane Society, which performs animal control services for San Mateo County under contract.

The society's spokesperson Scott Delucchi said a necropsy scheduled for Friday would seek to retrieve the bullets as well as examine stomach contents and tissue samples to establish whether the dog was correctly implicated in the attack.

Tissue samples will be taken from the second dog to determine if it could be returned to the victim's husband.

"This person has lost everything; this dog is all he has left," Delucchi said.

"Right now we are assuming that one dog was involved and one was not. We investigate hundreds of dog attacks every year but I've never seen anything like this in 13 years," Delucchi said.

To me it seems like there is so much more to this story.  The cowering dog in the corner would suggest that maybe the two dogs got into a fight and maybe the owner got in between them and the male redirected onto her.

I suppose no matter what the "real" story is, it does not excuse the action of the dog.  Our hearts go out to the husband and family of this woman.

Below is the news video for the full story: