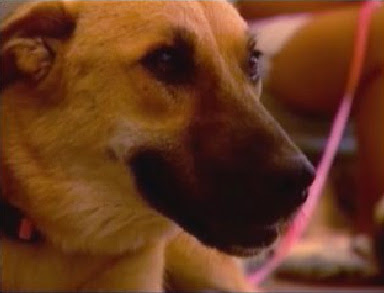 I feel like this is a week of bad news for dogs, I don't mean to be a downer, but this is important to talk about.  I read this story yesterday and again this morning, I think somewhere in my head I thought the outcome might be different.
The story is about an amazing dog named Target, she was a stray in Afghanistan and she and two other strays attached themselves to the Sgt. Terry Young's unit.  They actually stopped a suicide bomber from entering the compound and destroying it and all that were in it.  Target (who was pregnant at the time), Rufus and Sasha attacked the bomber and stopped him from entering, but sadly Sasha lost her life.  Rufus and Target on the other hand found homes out of it.  Sgt. Terry Young adopted Target and Sgt. Christopher Duke adopted Rufus.
After Target came to her new home in Arizona, she was honored as a war hero and even appeared on Oprah.  It would seem that life couldn't have been better for this once stray in Afghanistan.  But on Veterans Day, Target somehow escaped the Young's home and found herself in a local shelter.  This is where the most unthinkable mistake was made.  An employee of the shelter mixed her up with another dog and she was euthanized.  The Young family was devastated, especially their small children.  The employee was put on administrative leave and the preliminary investigations show the employee failed to follow clear-cut shelter procedure.  The shelter's doctor said the employee is completely devastated by her mistake.
I just don't understand how on earth this could happen!  WAKE UP PEOPLE, if you work in a shelter, veterinarian office, police force, pay attention to what you are doing.  There are protocols for a reason, to protect against stupid mistakes like this.  It is not just unthinkable but completely careless.  I really hope this is the last story like this I have to read or write about.  Rest in peaceTarget, we did not know you, but know you will be missed.
Below are a couple of videos about Target and Sgt. Young, the first is the complete story of the wrongful euthanization and second is the story of their reunion.


To view Dogster's story, bark on the link:  Bark!
Posted by Bark & Clark